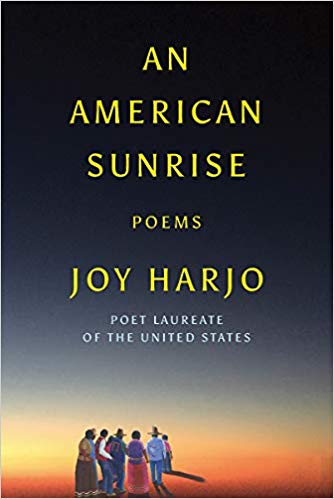 Joy Harjo’s latest full-length poetry collection begins with a prologue and a map. “On May 28, 1830, President Andrew Jackson unlawfully signed the Indian Removal Act to force move southeastern peoples from our homelands to the West. We were rounded up with what we could carry.” The map outlines one of many paths of the Trail of Tears.

Harjo, mincing no words, thus establishes the conceit of “An American Sunrise”. Its publication comes at the perfect time: just a couple months before, Harjo, a member of the Muscogee Creek Nation, was named America’s new Poet Laureate, the first Native-American to hold the position. She more than proves her literary prowess with her latest release.

Harjo seamlessly interweaves poems with brief instances of history written in plain but evocative prose, blurring the lines between art and historical document (not unlike what Tracy K. Smith, our previous Poet Laureate, did in her recent collection “Wade in the Water”). She traces her family history back to her distant grandfather Monahwee Okfuskee, who emigrated with his family to Indian Territory in 1836. This personal history acts as a foundation upon which much of the book’s poetry is built, informed by the years of racism and cruelty that Native peoples have faced in the United States.

There is, however, a great multiplicity of tone in these poems, showcasing Harjo’s range. She begins the collection with “Break My Heart,” a poem written in her characteristic straightforward yet powerful verse. Its placement marks it as a kind of invitation or invocation. She writes:

“There are always flowers, / Love cries, or blood.

Someone is always leaving / By exile, death, or heartbreak.

The heart is a fist. / It pockets prayer or holds rage.”

Indeed, her poems may appear deceptively simple, but hold layers of complex emotion. Her long-form poem “Exile of Memory,” whose sparse sections spread out over fourteen pages in a thoughtful use of space, directly deals with the legacy of forced Native American removal and the personal and cultural consequences of it. As Audre Lorde once famously said, “The personal is political,” and Harjo more than proves this. The poem’s length parallels the journey of exile, the slow plod across miles of sorrow and righteous anger. It stands out as one of the most powerful poems in the collection and perhaps the most lyrical, broken apart by the time, a poem written in a “world made by Puritan dreaming.” She writes:

“And then what, you with your words, / In the enemy’s language, / Do you know how to make a peaceful road / Through human memory?”

Also notable is the tenderness espoused by Harjo’s writing. In “Washing My Mother’s Body,” she imagines the act of caring for her mother after her death, something she never got a chance to do in real life. The poem is at once a lyric ode and an elegy, a testament to her mother’s strength and beauty as well as a farewell.

There is more contained in An American Sunrise than can accurately be summarized or reviewed. I leave you, instead, with Harjo’s eloquent dedication:

For the children, so they may find their way through the dark— / They are all our children.”

Is there a new release in poetry that you’d like to see reviewed? Contact me at natalie.patterson@salem.edu with your ideas!