Anna Fisher is a junior majoring in Non-Profit Management and Race and Ethnicity Studies.  Fisher spent a semester in Iringa, Tanzania.

Q: What made you decide to go to this particular place?

The program there [Tanzania] fit really well with my majors; it was a community development language and culture program. I wanted to go to a place that would be difficult for me to go otherwise on my own if I didn’t know anyone there; I wanted to take advantage of a new experience.

Q: What were you doing while you were there? 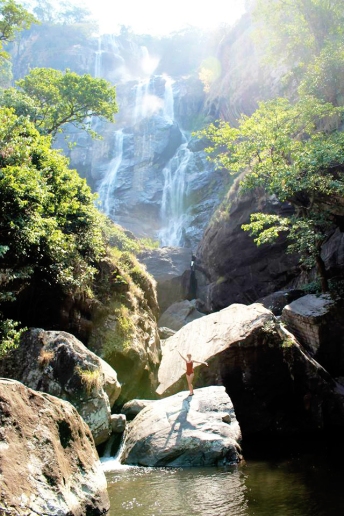 I stayed at a university in the dorms for most of the time and took classes, and then I spent month with a host family in a rural village doing research on orphanages and foster care. I went from household to household doing oral surveys, and they invited me into their homes. I had a translator, so I did ten interviews as well, all IRB approved.

Q: What was the best piece of advice given to you before you left?

Q: Were you affected by culture shock either upon arriving or returning home?

Both, I think. I wasn’t expecting to be affected by culture shock, but I think being gay and being in Tanzania was a little bit more than I expected it to be; I didn’t think it would affect me as much as it did. The time change and being away from everyone was a little bit difficult, and coming back to the States was a shock as well. I stepped into the Turkish airport and was completely overwhelmed that there was a Popeye’s. It’s been an adjustment, especially being back at Salem for the few days that I have been.

Q: If you were homesick, how did you deal with it?

Q: What, in your opinion, is the value in studying abroad?

I learned a lot about myself and what I’m able to do and what I’m happy and comfortable with, as well as learning about the culture, learning Swahili, and being able to adapt to certain situations. I think from now on, I’ll never be in a situation I think is “too awkward” ever again because I was in a lot of awkward situations. I had a host family that was very Catholic and at one point we had to hand out condoms to the community, so they had to watch me do that! I couldn’t speak to them; my Swahili isn’t that great so it was a little bit of a struggle. But overall, I learned a lot.

Q: What was the coolest thing you were able to do?

I got to go to Zanzibar! I traveled there with one of the girls in the program I was in and it was my first experience traveling in a foreign country almost by myself. It’s a long journey to Zanzibar from where I was, but it ended up being fantastic.

Q: What was the a highlight or big takeaway that you got from studying abroad?

Because I’m a non-profit major, I learned a lot more about international development and what it means to be in an actual community. I talked to people about how NGOs personally affect them and I got to see in real time how foreign investors influence the poverty of the country and the people that live there, which was really interesting and something I thought about a lot. It was also interesting to compare how Tanzanians see race compared to how we see it in the United States; I was the only white person in my program and very aware of my whiteness while I was there.