On Nov. 3, the Salem College Chamber Choir, Chorale, and SuperTonix  invited the Winston-Salem community to a night of music. The concert was conducted by associate Professor of music and Director of choral activities Dr. Sonja Sepúlveda.

The performance began with a dark auditorium. The choir members then filed into the auditorium in four rows carrying keychain lights. Sepúlveda explained why she made the choice to use lights: “I think there’s something exciting about it. It excites the neurons in our brains, and I think it makes us actually listen to the music even more because it’s a multimedia thing.” They also used the lights to aid their choreography for their performance of “Chorus Angelorum”. The choir members flashed their lights as they sung the word “lutz”, which means “light” in Latin.

The concert featured lively songs such as “Hlohonolofatsa”, arranged by Daniel Jackson. Sepúlveda wanted to do this piece because they were performing a lot of gospel songs rooted in African music. She wanted to do the song “to show the total abandonment that African music needs. If you’re going to do it, you have to just let your passion out.” The passion was prevalent in one of the girls from the Winston-Salem Youth Choir who continued to dance and sing the song after the performance ended.

A fun surprise in the concert was the performance of Billy Joel’s “Uptown Girl”. Sepúlveda herself joined the rest of the SuperTonix during the concert. She describes the SuperTonix class as a “collaboration” between herself and the students, rather than her teaching. The Chamber Choir and Chorale also performed songs on their own. Sepúlveda wanted the audience to see “how really fun both groups are and… how much stronger we are together than we are apart.”

One of the most powerful songs of the night was “Still I Rise”, composed by Dr. Rosephanye Powell. Sepúlveda was insistent in having the song in this year’s concert because of the song’s message: “no matter what…whether I’m put down, no matter what’s going on, no matter how many times I fall or how many times I fail, still I rise.” Soloists Fela Langston and Shania Guy were joined on stage by Powell as they all used their voices to express the inspiring message.

Powell was a guest conductor, soprano and composer at the concert. In the second half of the concert, the choir performed her piece “The Cry of Jeremiah”, which told the biblical story of the prophet Jeremiah and his struggle with his role as a prophet. According to Sepúlveda, Powell resonated with Jeremiah because she herself struggled with finding her purpose. However, according to Sepúlveda, Powell “realized that she had a work to do and although it wasn’t a fun work to do…she realized that it was a purpose and she had to do it.” 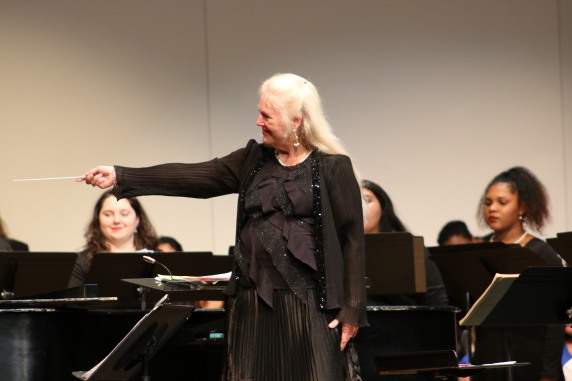 Sepúlveda described working with Powell as “scary” because “when you’re working with the person who wrote it you know that they’ve got…a specific CD in their head that’s playing, and your CD is probably not going to come up to it in any way, shape or form.”  She also explained that when you work with a piece’s composer, you develop a new understanding of the work that makes all of the stress worth it.

Choir member Monty Montgerard explained that the presence of the composer made the rehearsals the best part of the process. “She was very passionate about the work that she did,” Montgerard said. Powell instructed the choir about exactly how the songs were to be sung, so that they could accurately get the message behind the songs across to the audience. Powell’s dedication to delivering a message to the audience was further exemplified by her emotional narration of “The Cry of Jeremiah”. She wanted the audience to know of God’s faithfulness and that they will always survive.

Sepúlveda hoped that the audience left the performance feeling a sense of magic. “Each song has its own land, its own magic, its own story…I think of each song as a present under the Christmas tree. Everybody should have walked away from that performance…with some gift in their hands. I tried to make sure that there was a land and a magic that everybody could walk away with.”

Sepúlveda came to Salem eight years ago when there was only one student in the choir.  Since then, Sepúlveda has grown the choral program by helping Salem students realize that they can be singers. Sepúlveda finds it rewarding that she can take students “to places they’ve never been…mentally and emotionally.” She loves watching people “journey from being smart and being talented to being knowledgeable and being confident.”

Sepúlveda remarked, “where you come from, what you look like, who you are…when you start singing together, it all doesn’t matter, and I think that’s the power of music.”