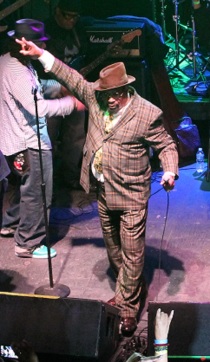 George Clinton and the P Funk played at Ziggy’s this past February and packed the house. Photo taken by Pat Sanderson.

Standing in line in the cold for the doors to open at 8 p.m., it was evident to me that this was not a typical weekday, small venue concert. People assembled in the line that trickled along the front of the building and into the parking lot was an eclectic bunch and a perfect representation of George Clinton’s career and the impact his music has had on several music genres and musicians today.

Fans ranged in age from 20’s to 60’s and bled through all the stereotypes of what the unfamiliar and uneducated perceive funk music fans to be. Almost all races, sexualities, and social classes were represented. Attire ranged from faux fur and pimp hats, leopard print and tights, suits and over coats, to t-shirts and jeans. That was just what the men were wearing. The ladies were even more diverse.

The band was scheduled to go on at 9 p.m. and didn’t take stage until nearly 10 p.m. However, with a DJ spinning tracks that were an “on the spot” house mix of nearly 50 years of funk, no one seemed to mind. The floor continued to fill until you could not even move through the crowd without initiating an odd almost dance so that you were able to duck when they were weaving and scoot by. It was wall to wall, from the stage to the back of the venue, and up the stairs to the balcony. It was packed.

Standing side stage, a suspicious cloud rolled out the side stage door as The Parliament Funkadelic somewhat meandered into their places and Mr. Clinton himself then took the stage.  The crescendo that emanated from the crowd was nearly deafening. He began with his more familiar songs. Songs that even if you say you do not know who George Clinton is, you will recognize when you hear them. “Flash-light”, “Give Up the Funk”, and “Atomic Dog” were some of the first played. Then he went on to a set from his new Album released in Nov. 25 of 2014, “First ya Gotta Shake the Gate”.

They sounded amazing live. The music was clear and there was an ease that George exhibits when he interacts with the audience and commands the stage, one that can only come from a long career and truly loving what you do. If you ever get the chance to go see him live, I recommend you take advantage of it cause it was a hell of a show.