The city of London has held a siren-like draw for me ever since I was a little girl, so I was very excited to actually visit London this Jan Term. Our class, led by Diane Lipsett and Anna Milholland, explored London and Oxford for twelve days, studying cultural and religious diversity. 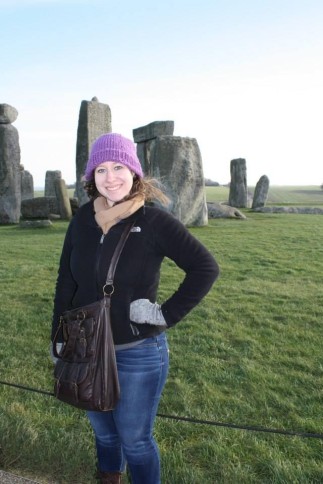 Hensley posing in front of Stonehenge.

The group was lovely and I found it intriguing that even though we were a small class there were so many unique personalities to work with and get to know. We visited cathedrals, mosques, and synagogues along with many marketplaces, famous attractions like Parliament, the Harry Potter studios, and an abundance of museums. We also had many memorable interactions with people we encountered around London and during our experiences riding the Tube, which is the underground railway serving all of London. We tried to ride the Tube on our first morning during rush hour with all of our suitcases, making quite the crowded splash onto the streets of London.

My favorite part of experiencing London was all of the history. We visited the Tower of London and were able to take a tour of the dungeons, see the crown jewels, and learn all about the historical impact of the Tower. Did you know that despite the Tower’s bloody legends only twenty-two executions actually occurred within its walls? The majority of executions happened on a hill a short ways from the Tower. We also were able to tour places like the expansive Westminster Abbey, mysterious Stonehenge, and the beautiful city of Oxford.

For me, this trip also held a lot of wonder and anticipation for the future. I am a Creative Writing major, so I found visiting London inspirational. Many talented writers, such as Jane Austen, have called Britain home and the fact that I was actually in the country where so many legends were born and lived was unbelievable. In Oxford, we enjoyed a very British dinner one night at a pub, The Eagle and The Child , where writers like C.S. Lewis and J.R.R. Tolkien met with their literary group, “The Inklings,” to discuss their writing and share stories. We also visited Poet’s Corner at Westminster Abbey in London and were able to see memorials dedicated to the great writers of old. It made me feel that someday I could be as beloved as all of them if I just keep writing. I hope that every Salem student has the opportunity to expand her view of the world through travel and fuel her desire to learn.