Candy, costumes, and scaring each other into cardiac arrest make October great, but there is also rich history to observe this month. A great place to get a taste of this history is the Wake Forest Museum of Anthropology. This month the featured exhibit is Life after Death: The Day of the Dead in Mexico. 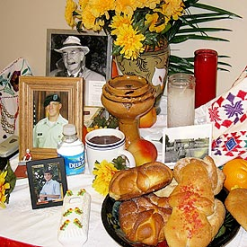 The centerpiece of the exhibit is a traditional ofrenda, an altar with food and beverage offerings, as well as flowers and photos of deceased family members.

The exhibit, which is in both English and Spanish, showcases the colorful and beautiful Mexican tradition of honoring the dead. The centerpiece of the exhibit is a traditional ofrenda, an altar decorated with flowers, sugar skulls, and photos as well as offerings of food and beverages for the dead.

There is both an adult ofrenda and one for children who have passed on. The child ofrenda features toys and sweets as well the other traditional elements. Also on display are pieces of skeleton folk art.

“The MOA is always a great place to pop into between classes” said one Wake Forest student visiting the exhibit “but the Day of the Dead is especially cool. I mean everyone loves sugar skulls, right.”

The exhibit runs from September 16th to December 12th and admission is free.